Home/ Elected Officials/ Mayor
Mayor Rick Elumbaugh is a graduate of Batesville High School and obtained a Bachelor of Science degree from Arkansas State University.  He was an educator with the Batesville School District for 30 years and managed the Batesville Municipal Pool for 32 summers.  Mayor Elumbaugh was elected to office in 2006 and during his tenure has represented Batesville on several levels including:

*Advocate for the Growing Healthy Communities in 2010

*Implementing the Let’s Move Cities, Towns and Counties program in our area, and was recognized by *First Lady Michelle Obama as a leader in the promotion of this program.

*Serving more than 8 terms on the Executive Committee of Arkansas Municipal League,

*Served as the President of the Arkansas Municipal League 2015-2016

*Currently serves as a member of the National League of Cities Energy, Environment & National Resources Committee

*2019 Recipient of the Marvin L. Vinson Commitment to Excellence Award presented by the Arkansas Municipal League 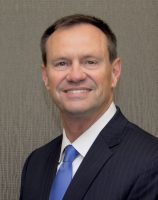